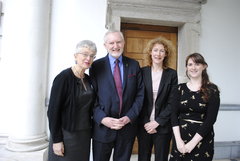 Legal rights group FLAC (Free Legal Advice Centres) says the government has "wasted a golden opportunity" to implement some simple changes to vastly improve a key welfare structure by voting down a motion from Independent senators in the Seanad last night.

On 24 October, FLAC released its report on reforming social welfare appeals system, entitled 'Not Fair Enough'. Received with much interest by legislators, it led to the independent Senators group in the Seanad putting forward a motion based on the report's findings. Senator Katherine Zappone proposed and Senator Fiach MacConghail seconded the motion, which was voted on last night (Wednesday 7 Nov).

There was a two-hour debate around the motion, which put forward some very reasonable and practical proposals to address some of the flaws in the appeals system. This included amending the appeals form to include the option to request an oral hearing, better resourcing at initial decision stage to maximise cost-effectiveness and reduce unnecessary appeals, and making significant previous decisions available to appellants similar to other similar quasi-judicial bodies.

"FLAC's recommendations are not meant to be antagonistic - they are intended to help bring the appeals system to a minimum standard on issues like fairness, independence and transparency. We undertook our analysis of the appeals system based on our experience with helping people to bring appeals, where we learned just how unnecessarily complex, opaque and unbalanced the process is," said Saoirse Brady, FLAC Policy and Advocacy Officer, who authored the report and helped draft the Independents' motion.

However, while the government Senators who spoke all expressed sympathy with the Independents' motion, and voiced their own concerns about the appeals system, they voted against it. Minister for Social Protection, Joan Burton TD, who was there to answer the motion, was hard-pressed to explain why she did not support making any changes to a system that is clearly not working properly.

"It would seem a shame that the sensible and practical measures suggested by the Independent Senators - who have no political axe to grind and should be commended for their initiative - are being ignored for the sake of politics," commented Ms Brady.

"We recognise that resources are tight, but let's remember that the job of the Appeals Office as a quasi-judicial structure is to decide whether a payment has been rightfully or wrongly withheld, in a fair and balanced way. It must not be swayed by policy direction or how much it will cost the Exchequer - its job is to uphold the entitlements and fundamental rights of those who seek redress where they have been wrongly refused."

FLAC and Northside Community Law Centre had given a joint briefing on the issues around the social welfare appeals structure earlier yesterday in the Leinster House AV Room.