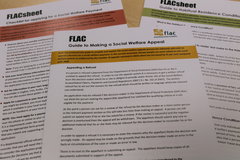 Legal rights group FLAC today called on the government to make some simple changes to improve a key support system for people in Ireland, ahead of a motion being put forward by Independent Senators around FLAC's recent report recommending root-and-branch reform of social welfare appeals.

Speaking before a lunchtime briefing for Oireachtas members ahead of the motion, FLAC Policy & Advocacy Officer Saoirse Brady said the motion clearly identified a number of actions that would vastly improve the efficiency and effectiveness of the Social Welfare Appeals Office. FLAC is concerned that the Appeals Office does not meet basic standards in several areas, including independence, transparency and a fair balance between both sides of the appeal.

"The structure of the social welfare appeals system is more or less the same since it was established more than 20 years ago, despite the fact that it is now coping with record numbers of appeals. While FLAC acknowledges some changes have been made to improve efficiency, people are still waiting too long for decisions and appellants are often at a disadvantage - they do not have access to information relevant to their appeal, including previous decisions. They may not always know that they can ask to present their case in person, which is particularly important as this gives a much higher success rate," said Ms Brady, who authored FLAC's report.

Editors' notes:
1. FLAC (Free Legal Advice Centres) is a human rights organisation which exists to promote equal justice for all. FLAC is an NGO that relies on a combination of statutory funding, contributions from the legal professions and donations from individuals and grant-making foundations to support its work. FLAC offers basic legal information through its telephone information line, its publications and website and free legal advice through its network of 80 volunteer evening advice centres. It also campaigns to reform the law on a range of issues including unfairness in social welfare law, personal debt, public interest law and civil legal aid.

2. The Not Fair Enough report and an Executive Summary are available to download as PDFs from the FLAC website - as well as a briefing note, a checklist of human rights principles for the social welfare appeals system and presentations on the appeals system from the Ombudsman, the Law Centre Northern Ireland and the Chief Appeals Officer.

3. The text of the motion is available online and will be in the Seanad in the session starting at 5pm, 7 November.

4. FLAC also launched three guides to aspects of the social welfare system which are free to download from its website:

5. Key issues raised in 'Not Fair Enough' include: