Comment on ECB Opinion on measures relating to personal insolvency 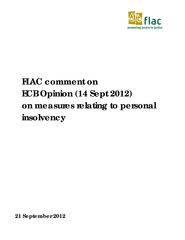 On 25 July 2012, the Minister for Finance requested an Opinion on the Personal Insolvency Bill 2012 from the European Central Bank (ECB. The full text of that Opinion (CON/2012/70) is available online. FLAC's response to that Opinion is set out below.

This paragraph says that the reforms are being introduced without the benefit of a thorough economic impact assessment. In a footnote, readers are asked to see the Explanatory Memorandum to the draft law. That memorandum, like most if not all similar ones, simply sets out the briefest of background explanations and then goes through a section by section recital of what each section says. While it would indeed be welcome if such memoranda contained a better explanation of the purpose of a Bill, it is fairly standard. It would be useful to see the regulatory and economic impact assessments of the legislation. Indeed it would be quite surprising if any of the current economic plans were being undertaken without a thorough impact assessment which would include an assessment of its impact on the poorer and more vulnerable sections of society.

Having said that, any examination of Irish society over the past four years, and certainly FLAC's experience is that a number of people need effective insolvency and bankruptcy mechanisms to eventually work through debt that they can pay and to write off debt that there is no realistic hope that they can pay. Ireland was severely handicapped by having no modern insolvency or bankruptcy legislation at all. Massively over-indebted debtors - and indeed their creditors - continue to be severely disadvantaged by its absence.

The same paragraph (2.3) notes that the administrative infrastructure is 'ambitiously conceived'. Having worked it through as best we can in theory, FLAC believes that the proposed system is disappointingly over-complex and risks duplication and lack of efficiency and effectiveness. In particular, the manner in which the court approval is stitched in risks creating a new structure called an Insolvency Service which is effectively powerless and where the already overstretched court system has to now prioritise insolvency applications, repeating investigations already undertaken by the new service. This seems to be wasteful of scarce resources. The ECB opinion notes that the new system must be workable. This system can of course be worked, but it could be much less complex.

The ECB, having noted earlier that the Personal Insolvency Arrangement (PIA) is unprecedented addresses itself in this paragraph to the debt threshold of €3million. It speculates that it may have significant financial implications for banks. It invites the authorities to take account of this and lowering the limit to €1million. FLAC notes that there is no explanation for why a limit of €3million was initially chosen for the PIA scheme. We also note that the proposed reduction to €1million suggested by the ECB also lacks any real justification. FLAC presumes that the groundwork has been done, and there is a rational reason for both suggested levels - that in the legislation and in the Opinion. However, for those outside the drafting process, the imposition of either limit is unclear.

This legislation is designed to write down debt which is unrecoverable within any reasonable timeframe. That unrecoverable debt is a reality. Credit institutions know that. This legislation is designed so that credit institutions will only be recognising loss that has already occurred. It is unclear how hiding or failing to recognising that real situation is in the interests of the state or the economy. It is certainly not in the interest of the chronically over-indebted and the ECB as well as Irish legislators must have regard to those interests as well. In particular, the rights of citizens of the European Union as enshrined in the Charter of Fundamental Rights to a high degree of consumer protection and the right of access to services of general economic interest must inform this debate.

It is noted that there is no reference to the rights of consumers at any point of this Opinion.

FLAC also respectfully reminds the ECB that both the PIA and the Debt Settlement Arrangement both include an effective creditor veto, against which there is no right of appeal for the debtor, making this scheme quite unusual from a legal perspective. Nor is there any oversight of whether credit institutions will behave responsibly in use of this capacity to reject even reasonable settlements, nor incentives for them to do so.

The Opinion also suggests that insolvent debtors need to co-operate with all creditors, not just with secured creditors. FLAC respectfully submits that this shows a misunderstanding of Irish law and practice. Apart from the limited number of clients which Money Advice and Budgeting Services (MABS) can handle, there is no system for negotiating with creditors in a holistic way. It is possible to do this with secured debt over the principal private residence of a debtor because of the introduction of a Code of Conduct on Mortgage Arrears by which all lenders are bound by the Central Bank and where there are some sanctions, albeit limited, for failure to observe the code. No equivalent exists for secured debt beyond the principal private residence. No equivalent exists for non-secured debt.

Other issues noted in the Opinion

FLAC notes with interest that the ECB recognises that the authorisation regime is crucial to the operation of the new law. It is extremely disappointing that the Committee stage of this legislation in the Dáil, commenced and concluded in approximately 3 hours on 13 September, was not used for a thorough discussion of the mechanisms of the draft legislation and was not used to produce detailed provisions for authorisation of practitioners. It is going to be crucial to the proper operation of the legislation. Legislators should decide the broad framework for their operation. Legislators should also examine whether it is realistic to assume that people with very limited income and assets, who will be able to repay very little, but are outside the ambit of the Debt Relief Notice, will be able to avail of Personal Insolvency Practitioners at all. These practitioners will run commercial operations and it is unlikely that many poor insolvent people with debts of over €20,000 will be able to make payments that will make their cases profitable. FLAC has recommended that consideration be given to the appointment of some Public Insolvency Practitioners who would provide state subsidised assistance, either in the format envisaged for MABS as authorised intermediaries or in the manner in which civil legal aid is delivered.

FLAC has already recommended a review after a year and notes a similar recommendation in the ECB Opinion.

Minimum income for a reasonable standard of living

The ECB Opinion fails to address at all the vagueness in the legislation relating to a minimum retained income for a reasonable standard of living. In order for the legislation to be workable, FLAC submits that the legislation itself must contain the broad principles to be assessed in any subsequent guidelines of the Insolvency Service. This, like the broad outlines for who will authorise/ administer the scheme is a matter of such importance in law and policy that it should be in the primary legislation. Failure to include it risks inadequate protection of consumers.

In a footnote, the ECB Opinion notes that there have been only a handful of applications filed for bankruptcy under the current bankruptcy legislation. This is of course explicable in the context of an expensive, unwieldy procedure which until 2011 might result in bankruptcy which could last for a life time and at least for 12 years. The reduction of time is welcome, but FLAC is concerned at the capacity to extend the maximum 3 year term by potentially a further 5 years of income payment orders. The legislation should specify more clearly the terms and circumstances in which such orders could and should be made to avoid a nominal reduction to 3 years but an economic limbo for those declared bankrupt of 8 years. Such an outcome would be entirely out of line with modern bankruptcy law knowledge and practice.

In September 2012 FLAC prepared a submission for the members of the Joint Oireachtas Committee on Justice, Defence and Equality which examines the legislation in more detail.