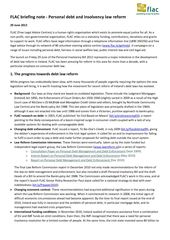 "This proposed law addresses issues on which FLAC has been campaigning for the last ten years," said FLAC Director General Noeline Blackwell. However she stressed that the new Bill must prove its effectiveness in the face of a massive and urgent societal problem of people unable to deal with their debts. According to Noeline Blackwell, "that means the state must offer a suite of effective solutions that people can understand and negotiate themselves or offer proper supports to guide them where appropriate."

FLAC broadly welcomed the Bill as providing a structure for people to start dealing with unsustainable debts in a structured manner. "While the Bill is only for those who are unable to pay their debts in full, it will also help people who need a bargaining chip with their creditors," said Ms Blackwell. However, she said the organisation continued to have concerns around the imbalance of power between banks and debtors, as the Bill preserves the creditors' veto in respect of the Debt Settlement Arrangement and Personal Insolvency Arrangement options.

"The proposed law as it stands still does not impose a legally binding obligation on lenders to accept reasonable applications from customers in arrears; neither does the new bill provide a right for debtors to appeal a creditor's decision in any of its options," said Ms Blackwell.

On this issue, FLAC Senior Policy Researcher Paul Joyce pointed out that where debtor applications are refused by creditors, the only options open to debtors under the legislation may be to apply for bankruptcy.

FLAC remains concerned that all four elements of government action on mortgage debt plan- new legislation, bank cooperation, debtor information and support, and social housing - must have monitors and checks built-in to ensure the plan is working for debtors.

The bill has improved provision for reviewing the effectiveness of the Personal Insolvency Arrangement option, down to five years from the ten years proposed in January. However FLAC argues that this is still too long - reviews should be annual - and should be applied across all options.

"The coming months will pose major challenges for everyone grappling with the new legislation. In particular, debtors will need comprehensive money and legal advice about the legislation, the options it presents and associated measures. The last thing indebted people need is a confused picture as to what and where state supports can be sought," commented Paul Joyce, FLAC Senior Policy Researcher. "It is unclear, for example, exactly how the new state-funded 'Mortgage Information and Advice Service' is to mesh with the existing state-funded 'Money Advice and Budgeting Service'. Plans around this aspect of the action plan should be clarified as soon as possible."

Initial reactions from FLAC to the Personal Insolvency Bill 2012:

The Bill is broadly similar to the draft scheme outlined in January 2012. There are a few interesting additions.

Overview : The four options below comprise three tiers of out-of-court arrangements and a final bankruptcy option through the High Court:

Editors' notes:
1. FLAC (Free Legal Advice Centres) is a human rights organisation which exists to promote equal justice for all. FLAC is an NGO that relies on a combination of statutory funding, contributions from the legal professions and donations from individuals and grant-making foundations to support its work. FLAC offers basic legal information through its telephone information line and free legal advice through its network of 80 volunteer evening advice centres. It also campaigns on a range of issues including personal debt, fairness in social welfare law, public interest law and civil legal aid.
2. FLAC has prepared a briefing note on the background to the reform of personal debt and insolvency laws which is available at http://bit.ly/PIbriefing
3. There will be a FLACsheet on the Personal Insolvency Bill available on the FLAC website shortly. This will offer an analysis of the Bill for those concerned about its proposals. FLAC stresses that the Bill is not a law, it is a proposal that has yet to be agreed by the Oireachtas.
4. FLAC released its Annual Report for 2011 on 18 June, available to download at http://bit.ly/annrep2011
5. FLAC has the following resources available on the issue of personal debt:

a) Conference Microsite on Legislating for personal insolvency in Ireland: International developments and domestic issues (April 2012)

b) Reports:
- FLAC report on debt enforcement in the Irish legal system, To No One's Credit, (July 2009)
- FLAC landmark report on treatment of credit and debt in Irish law An End Based on Means? . This report was well received by politicians, financial experts and money advisors (May 2003):

d) Papers:
- FLAC's overview of debt settlement schemes from around Europe, based on the work of Professor Jason Kilborn of John Marshall School of Law, Chicago (January 2012)
- Joint paper on 9 key principles on personal debt (October 2011)
- In September 2011 FLAC did an analysis of the latest mortgage arrears figures from the Central Bank which showed worrying levels of increase in arrears:
- FLAC Senior Policy Advisor Paul Joyce paper to the Law Reform Commission's Annual Conference on 'The Future of Debt Enforcement in Ireland' (December 2010).
- FLAC presentation to Joint Oireachtas Committee on Social and Family Affairs on levels & trends in personal debt in Irish society (April 2009)