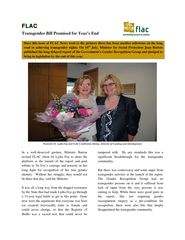 FLAC welcomes the Government decision to consider paying compensation to Dr Lydia Foy for its failure to officially recognise her as a woman for many years but points out that there is still no legislation to recognise Dr Foy or other transgender persons in their acquired gender.

This will be the first compensation claim to be made under the European Convention on Human Rights Act passed in 2003. FLAC, which has represented Dr Foy throughout her long legal battle for recognition, said she was entitled to compensation for the trauma and difficulties she had suffered over the years but that her distress and that of other transgender persons will not be ended until legislation is passed.

It is 15 years this month since Dr Foy began her long legal battle for recognition, said FLAC. It is nearly ten years since the European Court of Human Rights made clear in a case against Britain that transgender persons had a legal right to be recognised and it is nearly five years since the High Court here held that Lydia Foy's rights under the European Convention on Human Rights had been violated.

"We hope that generous and inclusive legislation that will not impose any unnecessary restrictions on transgender persons will now be given high priority by the Government so that another sad episode in our history of mistreatment of people because of their gender or sexuality can be brought to an end", said the legal human rights organisation.