State must address "human cost" of not aiding access to law 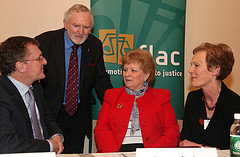 At a lecture in Dublin this evening Baroness Nuala O'Loan identified the twin barriers of an overly complex legal system and high costs as huge obstacles for people who need to access law. She contrasted huge expenditure on Tribunals of Inquiry with the dwindling funding allocated to assist people in accessing the law in Ireland.

She said that the State needs to find new ways of maximising its resources if it wishes to limit the damage to people "as they attempt to resolve problems which lie at the very heart of their capacity to function as people and as families."

Noting FLAC's emphasis on the human right of access to justice, Baroness O'Loan cited statistics on calls to the organisation's telephone information line that show a stark increase in legal queries on debt, family law and employment. While it was daunting for those of means, she emphasised that the justice system is even more intimidating for people with limited resources. There is a link, she suggested, between the "human cost" of mounting legal problems and the rise in suicide rates.

Although more people need help to find legal solutions to their difficulties, Baroness O'Loan drew attention to the State's gravely underfunded legal aid system. Applicants here may now wait up to almost a year to see a lawyer and many low earners cannot qualify for assistance under restrictive means tests.

By contrast, public spending on legal services in Ireland was among the highest in the world, she said, asking "how does Ireland finance Tribunals and other exceptional matters, whilst providing a reasonable and proportionate means of access to justice for the many people who are having to wait to get legal aid and advice across the whole country?"

The answer, she suggested, may be that prevention is better than cure. "Would better information about legal and welfare rights and obligations reduce problems and disputes? Has enough been done to try and ensure that the complex communication needs of some welfare recipients are met? Are there policies that you can only communicate through written correspondence? Are there help lines which actually work? Are the forms decipherable, comprehensible? Is there additional material which would assist? Can government be persuaded to provide enhanced funding to facilitate preventative work?" she asked.

In public structures like the social welfare system, Baroness O'Loan also proposed that investing in better first-instance decisions could widen access to justice by reducing the need for time-consuming, expensive-to-administer appeals. "One of the crucial factors in enabling access to justice is creating systems which will be robust, fair and inclusive and which will not lead to endless Tribunal appeals and court actions," she said.