40 Years On: Equal access to justice not a reality 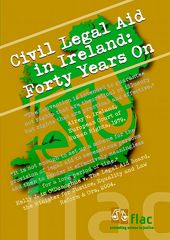 Cover image for Civil Legal Aid in Ireland: 40 years on

pThe economic downturn cannot be used as a justification to limit the protection of the rights of the individual, according to legal rights organisation, FLAC. As it celebrates the fortieth year of its work, FLAC is calling on the government to prioritise the needs of those who require aid and assistance in order to access legal services and the courts in a new report.

Speaking at the launch of the report Civil Legal Aid in Ireland: Forty Years On during an event on Saturday to mark the Fortieth Anniversary of FLAC's founding, its Director Noeline Blackwell affirmed that "FLAC remains committed to the achievement of real access to justice for everyone and will continue to work towards the realisation of a comprehensive civil legal aid scheme in Ireland. Access to justice means more than access to civil legal aid and an appointment with a lawyer. It is about meeting equally the needs of the people every community in Ireland. It is about access to the courts, lawmakers, service providers and information."

FLAC was honoured to have President Mary McAleese at the event, who commented "The 70 centres FLAC serves throughout the country tell their own story of the remarkable growth, vindication and integrity of what started life as a student project and the needs that it still exists to serve. They also tell us how important it is that in every generation there are men and women who don't just see the problem but who have the civic commitment and conscience that drives them to construct solutions even with the most modest of resources."

With the current economic downturn, FLAC has seen a huge increase in demands for its services. In 2008, FLAC head office received 9244 telephone enquiries to its information service. This is up 53% from 6034 calls in 2007 and 4303 calls in 2004, showing a sharply growing need for legal information and an increasing awareness of FLAC's service. The number of debt-related calls increased steadily over the year, with figures for October to December double those for January to March.

"The recession cannot be used as a reason to deny access to legal services and representation to those who need it the most. Equal access to justice is a fundamental human right for all as well as the right to a fair hearing. Unmet legal need continues to be a substantial problem in many communities in Ireland." Ms Blackwell continued.

In 2008 FLAC surveyed a range of organisations in the north east inner city area of Dublin in order to investigate issues of unmet legal need in the area. This research shows that the three areas of law most commonly dealt with by the organisations in terms of legal problems are local authority housing (77.5% of the organisations), social welfare (also 77.5%) and domestic violence (72.5%). The civil legal aid scheme only offers ready assistance in one these areas, domestic violence, which incidentally is also dealt with by the criminal legal aid scheme. Local authority housing is only deal with in exceptional circumstances and the Social Welfare Appeals Office is entreily excluded. While community organisations provide other vital services; they do not and nor is it their role to provide the legal services omitted by the civil legal aid scheme.

FLAC was set up 40 years ago to pressure the government into establishing a state civil legal aid scheme. This initiative finally met with success in the Civil Legal Aid Act 1995 which finally put the scheme on a statutory basis. However serious problems exist in relation to the scope of the legal aid scheme with a fundamental flaw in the system being the exclusion of certain areas of law, nine in total, from its remit. Because of this restrictive nature of the civil legal scheme, many of the people who require legal aid are denied it and as a result are effectively denied access to justice.

In spite of the existence of the current civil legal aid scheme and certain improvements made over the years, issues remain in relation to meeting the needs of marginalised groups regarding access to justice in terms of both the structure of and practice under the scheme.

The Legal Aid Board practice predominantly deals with family law issues in spite of its broader remit. While family law is a very important area of law for the work of the Legal Aid Board and those who use its services, FLAC's data shows that only approximately one third of the queries received at the 70 FLAC centres nationwide relate to family law. Awareness of the Legal Aid Board and its remit should be improved for both potential service users and for all those involved in the administration of justice to better understand the extent and the limitations of the scheme. Ms Blackwell said FLAC recognises the expert and valuable work done by individuals within the Legal Aid Board to promote access to justice over many years.

While civil legal aid may be granted to a person to take a case before the High Court for example, it is not available to access the Social Welfare Appeals Tribunal or most other tribunals such as the Employment Appeals Tribunal or the Equality Tribunal. This is in spite of the fact that these tribunals are a common means by which many poor people will attempt to access justice. These groups are left with no legal support.

In order to qualify for civil legal aid, an applicant must pass an overarching principle test, a means test and a merits test. As well as being assessed on disposable income, an applicant for civil legal aid must also submit to a capital assessment. Civil legal aid, unlike criminal legal aid, is not free. A person with a disposable income of €13,000 is liable to pay the maximum contribution of €150 for a consultation with a solicitor. All Legal Aid Board clients are expected to pay a contribution except in cases of "undue hardship." A recent FLAC survey shows that of those who had successfully applied to the Legal Aid Board for civil legal aid since 2006, 50% were not aware that they would have to make payments towards legal aid.

Since 1969, FLAC has been working towards the achievement of more equitable access to justice for all in Ireland. Over the years it has lobbied the government for the provision of free legal advice to those who could not afford legal fees to establish a civil legal aid scheme. Having achieved this primary aim, a central tenet of FLAC's work today, forty years on, is continuing to pressurise the government to provide a comprehensive scheme. The new report, Civil Legal Aid in Ireland: Forty Years On, provides an overview of the current situation concerning civil legal aid in Ireland today, highlighting recent developments.

A new FLAC initiative on the use of law in the public interest, the Public Interest Law Alliance, was also launched at the event. This initiative will focus on increasing understanding and links between those who work for the advancement of human rights and those who work as professional lawyers. Generally, it will seek to identify and devise strategies to address the critical legal issues facing disadvantaged and marginalised communities.