Campaign for fairness in social welfare decisions on HRC 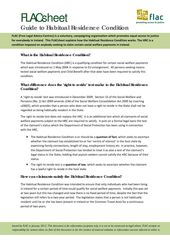 The campaign began in late 2006 as an attempt to restore Universal Child Benefit, because the introduction of the Habitual Residence Condition created an inequality between children living in Ireland, given that some groups were now no longer entitled to the payment. As a result, FLAC became an expert on the issue of the HRC and was contacted by a number of other NGOs for guidance and assistance.

In December 2009, FLAC issued a briefing paper on the social welfare rights of immigrants, jointly with Crosscare, MRCI and the Vincentian Refugee Centre. Unfortunately the following day the government introduced an amendment to its annual budget-related Social Welfare Bill that removed the right to social welfare payments (except Direct Provision) from all people seeking asylum or protection in Ireland, thus the briefing was updated in January 2010.

In December 2011, FLAC partnered with the AIRE Centre in London, and Lize Glass, legal consultant and former AIRE intern, in Amsterdam, in an EU Commission-funded Tri-City project on EU migrants' access to special non-contributory benefits. The project aims to improve the information for EU migrants in Amsterdam, Dublin and London on their right to access special non-contributory benefits.

The project began with the Aire Centre organising a round-table discussion in London on 19 January 2012. Leading practitioners and NGOs in the area discussed topics such as the application of the right-to-reside test in the UK, administrative delays as well as highlighting the problems faced by certain vulnerable groups such as victims of trafficking and domestic violence, homeless EEA nationals, and pregnant women.

On 1 March 2012 the second round-table took place in Dublin organised by FLAC and the AIRE Centre. More than 30 participants attended including legal practitioners, NGO advocates and academics with a wide range of expertise in social welfare law issues. .

The third roundtable for the project will take place in the Netherlands in May 2012. Materials from the round-tables so far are available below.

We need your help!

If you are a lawyer and you are interested in volunteering for work on social welfare law, please contact our campaigns officer.

With regard to the Habitual Residence Condition, FLAC advises anyone who is affected to consult some of the organisations that offer advice and assistance to immigrants and asylum-seekers or their legal advisors. We regret that FLAC is not in a position to advise on individual applications.

If you have further questions on FLAC's work, please contact us at campaigns@flac.ie or by telephone at 01-874 5690.