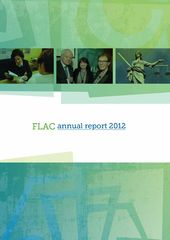 With an overarching aim of promoting access to justice, FLAC organises its work into providing basic legal information and advice, conducting legal research and analysis in our core areas, and advocating for legal reforms.

Key statistics for 2012 from FLAC’s basic legal information and advice services show continuing and emerging trends in public legal need; they also show that a more comprehensive and widely available system of legal help is required.

Our countrywide network of FLAC centres are run in conjunction with Citizens Information Centres all over Ireland – FLAC is eternally grateful to the staff of these CICs and to the dedicated volunteer solicitors and barristers who offer invaluable help to people needing legal advice.Queries to our centresremained steady, with 12,991 people receiving basic legal advice.
In terms of the legal issues being raised at centres, family law remained the top issue at 34.4% of queries, with employment law next at 15.3% and credit & debt law queries at 9.7%.
Some noticeable trends in 2012 include a 15% increase in housing/landlord & tenant-related issues, a 10% increase in neighbour dispute problems and in queries regarding wills, and an 11% increase in enquiries around solicitor-client relations.
We have compiled sets of regionally clustered data from our FLAC centres around the country, which are available on our website.

Our national telephone information & referral line provides basic legal information for free and in confidence from our lo-call number, 1890 350250.Our telephone line took 12,459 calls in 2012, marginally down by 3.6% over 2011.
Of these, 23% of callers had a family law query, while 12% of callers were asking about a credit/debt law matter. Employment law was the third most frequently mentioned area of law at 7.7% of calls.
As in our centres, there was a striking rise in queries around in housing/landlord & tenant issues, which were up almost 70% over 2011, reflecting in particular the increase in the number of ‘accidental landlords’  - people who are renting out their houses purely because of a need to meet mortgage expenses rather than make a living from their investment.
Calls about legal aid also rose significantly, increasing by almost 35%, while calls on negligence & personal injuries were up a third over the previous year.
Our website also had 65,980 unique visitors over the course of the year.

Other FLAC highlights from 2012 include a focus on key structures that allow people to access their rights:

In Not Fair Enough, we analysed the social welfare appeals system and made constructive proposals to address areas where it fails to meet human rights standards: overly complex, lacking in independence and beset with needless delays.
While welcoming new and badly needed personal insolvency laws, FLAC continued its long-standing campaign to insert a strong consumer voice in personal debt law reform with policy submissions, information events, including an international conference and a number of Oireachtas briefings, and analysis of legislative proposals.
With reform of the legal system approaching, FLAC made proposals to widen access to justice in the Legal Services Regulation Bill 2011. FLAC was also very proud to be associated with the launch of a new initiative to widen access to justice in the courts, in the form of the Child Care Law Reporting Project run by Dr Carol Coulter, in November 2012.
FLAC’s long-term support of transgender rights champion Dr Lydia Foy continued in 2012, with FLAC keeping a close eye on developments around legislating for transgender recognition in Ireland and raising the issue at national and international levels.


The organisation also supported people in challenging unfair systems, in consumer credit, social welfare and access to the civil legal aid system, where such strategic cases have an impact on the situation of many other people – in a variety of different arenas, not just in the courts. In 2012 these included:

A case where the Social Welfare Appeals Office agreed that an African woman who had been recognised as a refugee should have been paid arrears of Child Benefit. FLAC argued that the Minister of Justice’s decision did not make the woman a refugee, it simply recognised that she was one and therefore she was entitled to reside here and be paid Child Benefit from the time of her original application, having satisfied other habitual residence requirements.
FLAC took a number of cases on access to civil legal aid, with some people excluded simply because of the legal issue involved. Other questions related to whether a case should be treated as a priority by the Legal Aid Board, representation in childcare proceedings and cross-border legal aid.
A High Court appeal on a ruling by the Financial Services Ombudsman. The FSO refused a person seeking to recover payments he had made on a failed Hire Purchase contract, as per a clarification of the law that FLAC had achieved previously in the Gabriel case. The FSO argued that Gabriel created new law but FLAC maintained that it merely interpreted and clarified the existing legislative position. The FSO ultimately declined to oppose the FLAC appeal.