FLAC Statement on the death of Frank Callanan SC. 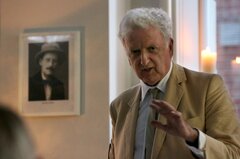 It is with profound sadness we at FLAC learned of the death of Frank Callanan SC.

He was without equal at the Irish Bar and his is death is a huge loss to the legal, cultural and political life of the country.

“Frank embodied the very best of the Irish bar. He abided by the “cab rank rule” assiduously and never turned a case away. While he never held himself out to be a ‘public interest lawyer’, he acted in some of the most complex cases on behalf of people who otherwise wouldn’t have been represented. He was an exemplary role model for any aspiring lawyer. He acted regularly for FLAC clients with no expectation of payment.

Those who were fortunate to be represented by him had an unswerving champion who was fearless and brilliant.

“As well as being an exceptional lawyer, Frank was also a historian and scholar, and the most entertaining of companions. We remember fondly Frank’s special lecture on ‘Joyce and the Law’ in June 2019, which combined his love of law and James Joyce and left his audience spellbound. It was one of the highlights of FLAC’s 50th anniversary celebrations.”

All in FLAC who knew him will miss his wisdom, generosity and sense of fun.”

We wish to extend our deep and sincere sympathies to his wife Bridget, his family, and his friends and colleagues.