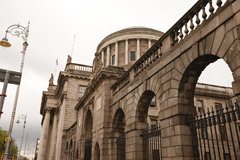 The High Court learned today that settlement had been reached in proceedings brought by a seriously ill homeless man against Louth County Council and the Minister for Housing, with the Council agreeing to provide him with emergency accommodation for six months following his discharge from hospital.

However FLAC (Free Legal Advice Centres), which represented Constantin Rostas in his action, believed this case arose because local authorities were incorrectly relying on a departmental circular to restrict access of extremely vulnerable people to emergency accommodation in the midst of the state’s worst housing crisis. FLAC is calling for an immediate clarification by the Minister for Housing that the circular does not apply to the provision of emergency accommodation.

Mr Rostas, who is an EU citizen, came to work in Ireland in 2008 and has been living and working here as a painter on and off since. He became ill in 2016 and was diagnosed with cancer and with tumours that affect his hearing and sight. Although so ill he could no longer work, he was deemed not to qualify for social welfare. He had no source of income and was left destitute.  Mr Rostas had been living with his brother, but had to move out when his brother became ill, and he became homeless. He was staying with friends on and off, but despite his condition was forced to sleep rough on a number of occasions in July and August 2017. He was referred to FLAC by Cáirde, a community organisation who had been assisting the man with his housing and securing a medical card and social welfare entitlements.

After FLAC intervened, Louth County Council initially agreed to provide him with hostel accommodation, but then withdrew that support, citing reasons related to a lack of a formal work history, the fact that he did not qualify for social welfare and that he was considered not to be habitually resident in the State. Mr Rostas is appealing the decision on his social welfare entitlements.

FLAC initiated High Court proceedings on Mr Rostas’ behalf challenging the refusal to grant him emergency accommodation and looking for injunctive relief against Louth County Council. The Minister for Housing was also joined in the proceedings on the basis of an administrative circular, 41/2012, that purports to provide guidance to local authorities in relation to the provision of housing support to non-Irish nationals. It was argued on behalf of Mr Rostas that the Circular was incorrectly applied and may be ultra vires (exceeding the powers conferred on the Minister by) the Housing Acts. FLAC also argued that the circular may not properly reflect aspects of EU law concerning the free movement of workers.

By the time proceedings were initiated, Mr Rostas had been admitted to Beaumount Hospital. Shortly thereafter, Louth County Council indicated that it was not contesting the case and has now agreed to provide Mr Rostas with emergency accommodation.

FLAC Managing Solicitor Sinead Lucey said her client clearly satisfied the requirements of the Housing Act 1988 for the provision of emergency homeless accommodation, pending a formal application for housing. “The Housing Acts give local authorities very broad discretion as to how they can assist persons who are deemed homeless. The law is intended to obviate the need for anyone to sleep rough or in unsuitable accommodation and thus ensure that their constitutional rights are not breached. However, local authorities are relying on a Department of Housing Circular designed to guide local authorities on the provision of long-term social housing supports. This is confusing in itself, but in any event FLAC believes the guidance is irrelevant to situations of homelessness where the Housing Acts and constitutional standards prevail,” she explained.

Eilis Barry, FLAC Chief Executive, welcomed the settlement: “While we are delighted that a seriously ill homeless man has been provided with emergency accommodation, it should never have come to this. The Circular issued by the Department of Housing is a source of confusion, particularly in cases of homelessness and destitution, and we believe it should not have been relied on in Mr Rostas’ situation.”

“FLAC will be writing to the Minister for Housing, setting out in detail what we perceive are the problems with the Circular and asking him to clarify that the circular does not apply to the provision of emergency accommodation and to conduct a review of its operation.”

2.—A person shall be regarded by a housing authority as being homeless for the purposes of this Act if—

(a) there is no accommodation available which, in the opinion of the authority, he, together with any other person who normally resides with him or who might reasonably be expected to reside with him, can reasonably occupy or remain in occupation of, or

(b) he is living in a hospital, county home, night shelter or other such institution, and is so living because he has no accommodation of the kind referred to in paragraph (a),

and he is, in the opinion of the authority, unable to provide accommodation from his own resources