Budget 2016: Government must remember those who are not part of recovery 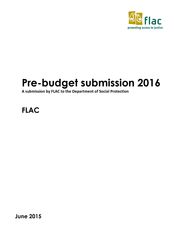 Legal rights group FLAC today said while there was much to welcome in Budget 2016, its focus on ‘keeping the recovery going’ should not mean it left behind those who have not been part of the recovery so far.

The independent human rights organisation welcomed measures in the budget that will ease the austerity burden for many and restore welfare payments to groups such as carers which had been badly cut. FLAC was pleased to see increased staffing for the over-burdened courts system and in particular more funding for the over-stretched Legal Aid Board.

FLAC also welcomed the attention to restoration of key public services, including meeting the basic human rights of some children, who have been identified as the group most adversely affected by the austerity period.

However FLAC Director General Noeline Blackwell outlined some concerns. “In particular, people in immediate danger of homelessness through eviction - whether as mortgage holders or private rented tenants – will have seen no provision to protect them in these speeches. Mortgage-to-rent is universally hailed as an important way for households to avoid homelessness, but what has happened to it since the last announcement in May? What about rent supplement, when people cannot pay under current levels? There are too many gaps in this area for us to know whether any of the measures announced will have the impact so desperately needed.”

Also, despite a recommendation in June from the Working Group on the Protection Process to increase the weekly allowance to children living in direct provision centres from €9.60 to €29.80 and the Budget’s €5 increase for all other children in the state, it remains unchanged for a 16th budget. Similarly, while giving a tax credit to self-employed people will undoubtedly help to alleviate financial pressures, Budget 2016 will not give crucial supports when they are most vulnerable by allowing them to access contributions-based payments such as Jobseekers and Illness Benefit.

Ms Blackwell said that it was difficult to see how effective these measures will be due to the lack of transparency around how the budget decisions were made and the lack of a baseline measurement against which to gauge progress.

“We are very happy to see moves towards restoring areas that have been cut. The United Nations asked our government in June to review cuts made during the crisis and to restore them at the first opportunity. And while there is much that we can welcome in this ‘recovery budget’, it is disappointing that we still cannot see clearly and plainly what the government has done to assess people’s actual needs, evaluate the impact of proposed measures and allocate resources in a way that will avoid hitting vulnerable groups unfairly,” she said.

She continued: “People cannot assess the overall effect of the budget until the changes have been implemented and are underway, making the process opaque & closed, rather than transparent and accessible. For example, the government seems to have recognised that insecure housing and homelessness are a problem, but it remains hard to discern a clear direction as to how it plans to really resolve the problem.”