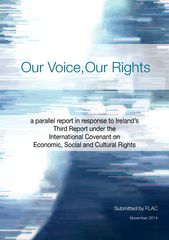 An independent report detailing gaps in how the state is meeting its obligations under an international treaty on economic, social and cultural rights was launched this morning, making recommendations for government action that range from increasing the minimum wage and reviewing zero-hour contracts to ensuring families are housed and rent is affordable to tackling the two-tier healthcare system, providing affordable and clean water and ensuring broadband in rural areas.

‘Our Voice, Our Rights’, which was drawn up from research coordinated by FLAC (Free Legal Advice Centres), is aimed at influencing the UN Committee on Economic, Social and Cultural Rights, which meets in early December to draw up a List of Issues on which it will examine the Irish Government next year. At the launch Focus Ireland, the Irish Heart Foundation, Community Law & Mediation, the Irish National Organisation of the Unemployed and cultural rights group Blue Drum, which all contributed to the report, spoke to highlight particular issues.

“This research is intended to provide a broader, more inclusive source of information from a wide variety of diverse organisations throughout Ireland for the Committee,” explained FLAC Director General Noeline Blackwell. “So while FLAC is presenting the report, it actually reflects the evidence from a range of organisations and individuals who are working at ground level nationally and locally to promote and defend human rights. This makes the report a strong, authentic reflection to government and the State of the lived experience of how human rights are implemented in Ireland.”

Issues arising in the report cover such areas as education, health, housing, workers’ rights, social security, employment, protection of families and cultural life. “As we did our research, we found that the recession of the last six years had done great damage to the capacity of many people to live in dignity across the broad array of rights that affect the lives of people. We did not see the evidence that the State had taken the protection of those human rights into account in the various austerity measures imposed.  This remains a challenge for the State as it has a binding legal commitment to protect and promote fundamental human rights even in recessionary times.

With the other organisations involved, we are hoping that this report will provide the basis over the next number of months  for a really thorough examination  and debate with Government about how real effective rights can lead to a better Ireland ,” commented Ms Blackwell.

There will be contributions from the floor from other organisations.