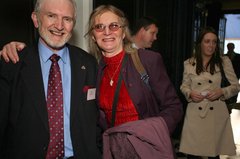 The landmark and long-running Lydia Foy transgender legal case has been settled today following a Government commitment that it is its “firm intention” to introduce a Gender Recognition Bill in the Oireachtas and have it enacted “as soon as possible” in 2015.

Dr Foy’s case was due for hearing on 4 November next, but was taken out of the list today when Nicholas Butler SC, counsel for the State, told the High Court that it was the Government’s “expressed intention” to enact legislation that would allow Dr Foy to obtain a birth certificate reflecting her female gender.

He said the Government intended to publish the Gender Recognition Bill by the end of the year and added: “It is the firm intention of the Government to introduce the Bill into the Oireachtas and have it enacted as soon as possible in 2015”.

Based on this commitment, Bill Shipsey SC, counsel for Dr Foy, said the case should be taken out of the list for hearing on 4 November but should be listed for mention again on 29 January 2015.

FLAC (Free Legal Advice Centres) has represented Dr Foy throughout her lengthy legal struggle. FLAC Senior Solicitor Michael Farrell said this was a welcome, if overdue, conclusion to 17 years of litigation by Dr Foy just to get herself recognised in the gender she has lived in every day for the last 24 years.  He noted it was also a major step forward for the transgender community in the State, who have been waiting for legal recognition for many years.

Mr Farrell said Dr Foy was very pleased at this agreement which ended 21 years of fruitless correspondence with state agencies and lengthy litigation just to get a birth certificate showing her female gender.