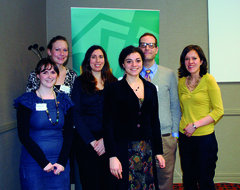 FLAC has partnered with the AIRE Centre in London, and Lize Glass, legal consultant and former AIRE intern, in Amsterdam, in an EU Commission-funded Tri-City project on EU migrants' access to special non-contributory benefits. The overall aim of this project is to improve the information that EU migrants in Amsterdam, Dublin and London have about their right to access special non-contributory benefits.

The project began with a round-table discussion in London, which was organised by the AIRE Centre and took place in London on 19 January 2012. Leading practitioners and NGOs in the area discussed topics such as the application of the right-to-reside test in the UK, administrative delays as well as highlighting the problems faced by certain vulnerable groups such as victims of trafficking and domestic violence, homeless EEA nationals, and pregnant women.

On 1 March 2012 the second round-table took place in Dublin organised by FLAC and the AIRE Centre. More than 30 participants attended including legal practitioners, NGO advocates and academics with a wide range of expertise in social welfare law issues.

The third roundtable for the project took place in the Netherlands in May 2012. A representative attended from the EU Commission which is funding the project and it was attended by academics and advocates from migrant and also disability organisations.

Materials from Roundtable 1 held in London:

Materials from Roundtable 2 held in Dublin:

Materials from Rountable 3 held in the Hague: